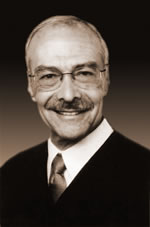 Evaluation: Judge Jim Wechsler received very high ratings in all of the attributes considered in his present and previous judicial performance evaluations. His strengths include legal competence, fairness, demeanor, and communication skills. He is a hard worker who is committed to being timely in making rulings and rendering decisions. He discharges his administrative responsibilities diligently and conducts himself in a manner free from impropriety. The overall assessment of Judge Wechsler's performance indicated he is well respected and appreciated by those who appear before him as well as colleagues in the court system.

Experience & Education: Judge Wechsler has served on the Court of Appeals since December 1994. He currently serves as Chair of the Advisory Committee on the Code of Judicial Conduct and as Chair of the Judiciary's Budget Committee. He is also a member of the Judicial Education and Training Advisory Committee. Judge Wechsler has served on numerous Supreme Court and State Bar Committees. Before assuming the bench, he worked in private practice. Judge Wechsler received both his undergraduate and law degree from New York University.