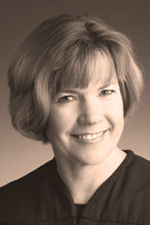 Evaluation: Judge Walton received positive ratings from all populations surveyed for her evaluation. Some of her specific strengths include her diligence in discharging responsibilities, her attentiveness to the proceedings, maintaining appropriate hours, and her ability to quickly and decisively rule on procedural and substantive matters. In addition, Judge Walton was rated positively for her knowledge of the rules of procedure and evidence. Judge Walton is committed to improving her performance.

Experience & Education: Judge Walton has served as a Metropolitan Court Judge since August 1999. Before her appointment, she served as Assistant Attorney General with the Criminal Appeals Division, Deputy General Counsel for the New Mexico Corrections Department, and Assistant City Attorney-General Counsel for the Albuquerque Police Department. She has been actively involved in various community and professional organizations, including the public school system and the New Mexico Women's Bar Association. Judge Walton received her undergraduate degree from New Mexico State University and her law degree from the University of New Mexico.