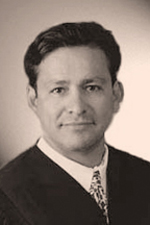 Evaluation: Judge Frank Sedillo's overall results were positive. His specific strengths include discharging administrative responsibilities diligently and maintaining appropriate hours given his workload. He also received high ratings for being punctual in commencing proceedings and scheduling hearings and trials.

Experience & Education: Judge Sedillo was elected to the Bernalillo County Metropolitan Court in 2000. Before his judicial appointment, he had a private law practice in Albuquerque. He is a member of the New Mexico Bar Association and the American Bar Association. He has been very involved with the Young America Football League. He has served on numerous legal committees. He is the founder of “Jacob's Promise" – adopt a family for Christmas. Judge Sedillo received his undergraduate and law degrees from the University of New Mexico.