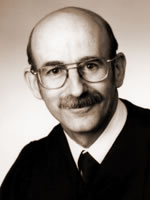 Evaluation: Judge Blackmer received excellent evaluations from lawyers, as well as resource and court staff. These survey respondents indicated that the judge conducts himself in a manner free from impropriety, behaves in a dignified manner, is knowledgeable of the law, and is courteous to all participants. Judge Blackmer has undertaken efforts to improve in the areas of punctuality and timely ruling on procedural matters. Judge Blackmer is dedicated to his profession and committed to continued self-improvement.

Experience & Education: Judge Blackmer has been a District Court Judge for over 15 years (nearly two years in the First Judicial District and over 13 years in the Second Judicial District in Albuquerque), serving 7 years as a Family Law Judge and over 8 years as a Felony Criminal Law Judge. In 1997, Judge Blackmer received the "Outstanding Judicial Service" Award from the New Mexico State Bar. Before he became a District Court Judge, he was an Assistant District Attorney in New Mexico, a New Mexico Assistant Attorney General, and an Assistant United States Attorney in New Mexico. He received his undergraduate degree from Colorado College and his law degree from the University of New Mexico. He served in the U.S. Army as a Paratroop Officer and received the Army Commendation Award.