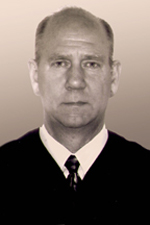 Evaluation: Judge Kevin Fitzwater received positive ratings from all groups surveyed in this evaluation. He is well respected for his courteousness, dignified behavior, control over the courtroom, attentiveness to the proceedings and his communication skills. He also received positive ratings for his knowledge of the rules of procedure and evidence, and his knowledge of substantive law. Although this evaluation revealed no specific areas of weakness for Judge Fitzwater, he is committed to ongoing self-improvement.

Experience & Education: Prior to his appointment to the Bernalillo County Metropolitan Court in 1997, Judge Fitzwater served as deputy district attorney in Bernalillo County. He specialized in criminal trial law and mental health law issues. Judge Fitzwater is active in various community and professional organizations and currently serves in the Marine Corps Reserve as a Lt. Colonel. He received both his undergraduate and law degrees from the University of New Mexico, and holds an MBA from National University in San Diego, California.