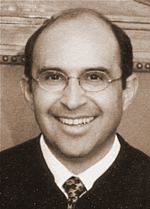 Evaluation: Justice Edward Chavez received consistently high ratings in this evaluation. He exhibits strengths in all judicial performance categories, including timely submission of his authored opinions, effectively handling his workload, working hard, and discharging administrative responsibilities diligently. His decisions are readable and understandable. He conducts himself in a manner free from impropriety and demonstrates knowledge of substantive law. Although this evaluation indicated no specific areas of weaknesses or concern, Justice Chavez is committed to improving his own judicial skills.