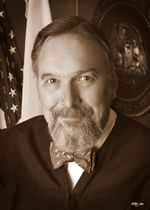 Evaluation: Judge Roderick Kennedy received positive ratings from all populations surveyed for his evaluation. Some of his specific strengths include conducting himself in a proper manner, his demeanor in the courtroom, his courtesy to court staff and his ability to render opinions without regard to criticism. Judge Kennedy achieved somewhat lower ratings in the area of complying with appellate time standards. Judge Kennedy has indicated that this likely was the result of pursuing his election in 2002 and of giving priority to responding to work needed on other Judges' cases in which he was a member of the panel. (Three judges must participate in every Court of Appeals case.) Judge Kennedy has indicated a desire to continue to improve his legal scholarship and his ability to express himself, in both of which areas his ratings were already positive.

Experience & Education: Judge Kennedy was first elected to the bench in 1988, serving on Albuquerque's Metropolitan Court for eleven years until his appointment to the Court of Appeals in 1999, and again in 2001. He has also been a judge pro tem for the Jicarilla Apache Nation in Dulce, NM. Prior to assuming the bench in 1988, he worked in private law practice and as an Assistant District Attorney. Judge Kennedy has been consistently involved in a number of professional and civic activities; he has been recognized with several awards for his contributions to the legal profession, including the British Forensic Society's 2003 Firth Award. He received his undergraduate degree from the College of Wooster in Ohio, and his law degree from the University of Toledo.