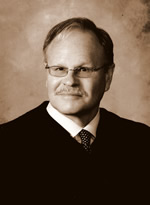 Evaluation: The Rules Governing the Judicial Performance Evaluation Commission do not provide for evaluations of judges unless they have served at least two years in their current position. Justice Richard C. Bosson has served on the New Mexico Supreme Court since December 2002, which does not allow enough time for the Judicial Performance Evaluation Commission to evaluate him prior to the November 2004 election.

Experience & Education: Before joining the New Mexico Supreme Court, Justice Bosson served for over eight years on the New Mexico Court of Appeals where he was Chief Judge from 2001-2002. He was successfully retained as a Court of Appeals Judge by a vote of the people at the November 1996 election. During his term on the Court of Appeals, he studied and received a Masters Degree in the Judicial Process from the University of Virginia School of Law. Justice Bosson received his law degree from Georgetown University Law School and has been a continuous member of the New Mexico Bar in good standing since 1970. He has been active in community involvement, particularly in youth soccer.