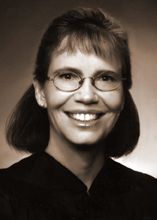 Evaluation: Judge York received exceptionally high ratings from all groups surveyed for this evaluation. She is an excellent judge whose strengths include her demeanor and courtesy to courtroom participants, her attentiveness and control over proceedings, her basic sense of fairness and avoidance of impropriety in her conduct. Judge York has maintained, and even improved upon, the high ratings given in her previous evaluation. Her ratings have improved in several areas, including communication, knowledge of the law, promptness in commencing proceedings and in scheduling hearings and trials, discharging administrative responsibilities diligently and in overall judicial performance.

Experience & Education: Judge York was appointed to the District Court in December 1997. Prior to her appointment, she worked in the Public Defender Department, in private practice where she specialized in representing sexually abused individuals, and as a law professor. She is active in several community and professional organizations, including service as co-chair of the Equal Access to Justice Fund and participation in the Women Judge's Association. Judge York received both her undergraduate and law degree from the University of New Mexico.