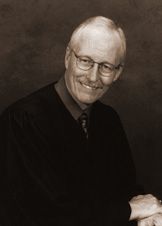 Evaluation: Judge Birdsall received positive ratings from all groups participating in this evaluation. The judge was given high scores for his demeanor and punctuality, with respondents indicating that he runs an efficient courtroom and handles cases in a timely manner. Judge Birdsall received slightly lower, although positive, ratings in the area of impartiality. Judge Birdsall has expressed a desire to improve on his already high overall ratings.

Experience & Education: Judge Birdsall has served as District Court Judge since January 1999. Prior to this he worked in private practice and as the San Juan County District Attorney. He has been active in civic, fraternal and charitable organizations and helped establish the Safehouse Program for abused children at Childhaven. He has been actively involved in the court's Self-Represented Litigants Program, Pre-Trial Services Program, Adult Drug Court Program, and the Electronic Filing Program. He received both his B.A. and his law degree from the University of Missouri-Columbia.