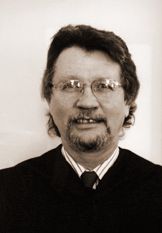 Evaluation: Judge Wilson received high ratings in all of the areas evaluated. He received high scores for commencing proceedings with punctuality, being attentive in the courtroom, maintaining appropriate work hours, and behaving in a dignified manner. No specific weaknesses were identified as part of this evaluation. The judge has consistently shown a willingness to develop specific and effective strategies for self-improvement.

Experience & Education: Judge Wilson has served as a District Court Judge since 1994. His previous experience includes work in private practice, and as an Assistant District Attorney, District Attorney, and City Attorney. Judge Wilson's community activities include participation in the Otero County Council on Alcohol and Alcoholism, the White Sands Rotary Club, and the Otero County Association of Retarded Citizens. He received his undergraduate degree from Kenyon College and his law degree from the University of New Mexico.