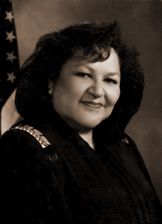 Evaluation: Judge Vigil received high ratings in this evaluation, particularly for behaving in a dignified and courteous manner, ensuring the professionalism of her personal staff, and treating all court participants equally. No specific weaknesses were identified by the survey respondents, although Judge Vigil did receive slightly lower ratings with regard to her knowledge of the rules of procedure, evidence, and substantive law. Judge Vigil indicated that she is working to enhance her expertise of these areas. Judge Vigil has demonstrated a commitment to her profession and an interest in continually improving her judicial knowledge and skills. Judge Vigil's performance as a District Court Judge was rated very favorably. Survey results from those who have been involved in his court indicate he is among the highest rated judges included in this evaluation. Specific strengths include conducting himself in a manner free of impropriety and displaying a sense of basic fairness and respect toward participants in his court. The evaluation also indicates that he understands the proper role of a judge and is diligent in discharging the administrative and judicial responsibilities of the court system. Judge Vigil has shown impressive improvement in most areas and is dedicated to continued improvement.

Experience & Education: Judge Vigil was first elected to the District Court bench in November 1998. Prior to her election as judge, she served as a Domestic Violence and Mental Health Commissioner and as a Child Support Hearing Officer in the First Judicial District. Judge Vigil has also worked as an attorney in private practice, as a tribal attorney for the Tesuque Pueblo, and as Assistant Attorney General for the State of New Mexico in the Criminal Appeals Division. Judge Vigil has been active in many professional organizations, including several involved with Native American issues. She received both her undergraduate degree and her law degree from the University of New Mexico.