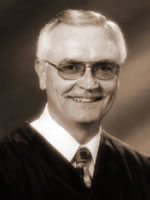 Evaluation: Judge Valentine received positive scores from all populations surveyed during this evaluation process. He has served in the Civil Division as chief judge during a period of tremendous growth in the district and has shown admirable leadership in addressing changes resulting from that growth. This evaluation revealed several of the judge's specific strengths, including his courteous and dignified manner in the courtroom, his attentiveness and punctuality in conducting the proceedings. Judge Valentine has maintained, and in some cases improved upon, the high ratings he received in his previous evaluation. The current evaluation results indicate no specific areas of weakness or concern.

Experience & Education: The judge was elected to the District Court in 1994, where he handles civil litigation. Prior to his current position he spent 21 years in private practice; he also served as President of the District Judges' Association. Judge Valentine occasionally lectures at the College of Engineering at New Mexico State University, where he is an adjunct professor. The judge received his undergraduate degree from New Mexico State University and his law degree from the University of Texas at Austin.