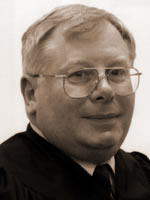 Evaluation: Judge Shuler's performance evaluation resulted in satisfactory scores. Some of the highest ratings he received were for his knowledge of the rules of procedure and evidence and for his knowledge of the rules of substantive law. He was rated highly for his promptness in scheduling hearings and trials, attentiveness to proceedings, maintenance of proper control over the courtroom, and receptiveness to alternative resolutions. The evaluation revealed some areas in which Judge Shuler needs to focus self-improvement efforts. However, these same areas of concern were raised in his previous evaluation, and the judge has subsequently made improvements in each of these areas.

Experience & Education: Judge Shuler has served as District Court Judge since 1986, bringing ample experience to the position. Prior to serving on the bench he worked for ten years in private practice. The judge has been consistently involved in community and professional organizations; among his achievements are his roles in founding Grace House, a group home for boys, and Eddy County Appointed Special Advocates (CASA), a group to help abused children in court. Judge Shuler received his undergraduate degree from the University of Arizona and his law degree from Pepperdine University of Law.