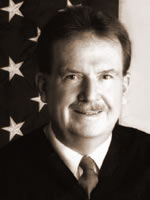 Evaluation: Judge Scott received positive ratings from all groups surveyed for this evaluation. Specific strengths include that the judge behaves in a dignified manner, free from impropriety, that he is courteous to all participants and is attentive to proceedings. Judge Scott's evaluation revealed no specific areas of weakness. He has consistently demonstrated an interest in and commitment toward ongoing self-improvement. Further, Judge Scott has maintained and/or improved upon high ratings received during his previous evaluation.

Experience & Education: Judge Scott has served as District Judge for twelve years, including eight years in the Civil Division, prior to which he served as Probate Judge for four years. The judge has also participated in numerous professional and community organizations, including service as past president of the New Mexico District Judge's Association. Judge Scott received both his undergraduate and law degrees from the University of New Mexico.