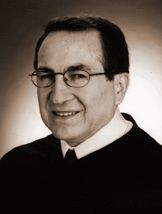 Evaluation: Judge Sanchez received favorable ratings as part of this evaluation. The commission notes that the judge handles a heavy criminal docket and manages to give each case his entire attention and consideration. He is experienced in the area of criminal law and brings to the bench his years of insight and efficiency. Some respondents participating in this evaluation indicate that the judge's oral decisions and communications need improvement. It should be noted that since his previous evaluation, Judge Sanchez has shown improvement in several areas, including making timely rulings and a greater number of decisions from the bench; he has also worked on rendering clearer rulings.

Experience & Education: Judge Sanchez received his B.A. from the University of New Mexico and his Law Degree from Oklahoma City University. He has served as District Judge in Bernalillo County since 1985.