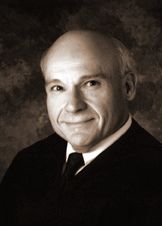 Evaluation: Judge Murdoch received positive ratings from all groups surveyed in this evaluation. Results indicate specific areas of strength include his effective handling of the courtroom and his thorough understanding of the law and the rules of procedure. In addition, the judge has taken on extra duties as a major sponsor of the drug court, a position which requires a generous amount of volunteer hours and dedication to people in treatment. One area of weakness identified by this evaluation relates to his communication skills in the courtroom. Judge Murdoch indicates he has taken steps to respond to this perception. It should also be noted that he has maintained or improved upon high ratings in most other areas since his prior evaluation.

Experience & Education: Judge Murdoch has served on the bench for 16 years. Prior to this, he worked for the Office of the Public Defender and served as District Public Defender for the Second Judicial District. The judge is a graduate of the University of New Mexico Law School. He has received a number of awards for community service, including New Mexico Big Brother of the Year and Carrie Tingley Foundation Volunteer of the Year.