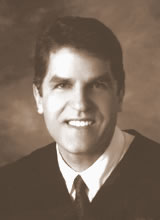 Evaluation: Judge Knowles received favorable ratings in this evaluation. Specific areas of strength include dedication to his work, effective communication, punctuality, and knowledge of the law.The judge received lower ratings for his perceived arrogance in dealing with attorneys, a concern that was also identified during his previous evaluation. Judge Knowles has stated that he has taken steps to deal with this perception. It should be noted that survey respondents indicate that he has made improvements in other areas relating to communication and demeanor.

Experience & Education: Judge Knowles was appointed to the District Court in April 1995 and won election to the same position in 1996. He is currently assigned to the Criminal Division and is instrumental in promoting the Drug Court Program in Bernalillo County. The judge was admitted to the bar in 1983 and subsequently practiced law as a private attorney and a public defender. He is active in various professional and civic associations. Judge Knowles received both his undergraduate and law degrees from the University of Florida.