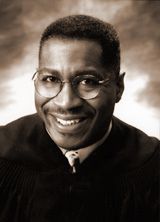 Evaluation: Judge Jewell is a competent judge. He received positive ratings, with specific strengths in the areas of demeanor and fairness. The judge strives to be patient and a good listener in the courtroom.The users of Judge Jewell's court expressed concern with his promptness in scheduling trials, punctuality in commencing proceedings, and maintaining appropriate hours. Judge Jewell stated that he is often out in the community and is also the presiding judge for Children's Court, which he believes explains why others feel he does not maintain appropriate hours. Judge Jewell exhibits a positive attitude toward self-improvement.

Experience & Education: Judge Jewell has served 18 years on the bench, the last 10 years on the Children's Court. Prior to this, he was in the private practice of law and worked as a Legal Aid Society Staff Attorney and as a Bernalillo County Metropolitan Court Judge. He received his BA from New Mexico State University in 1976 and in 1979 graduated from the University of New Mexico School of Law.