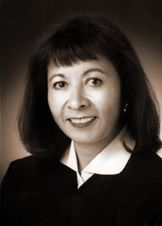 Evaluation: Judge Baca received favorable ratings in this evaluation overall. Some of her specific strengths include her knowledge of the rules of substantive law, her consistent ruling on motions in a timely manner, and her ability to maintain proper control over the courtroom while displaying basic fairness. This evaluation revealed no specific areas of weakness for Judge Baca, and she has maintained the positive ratings received in prior evaluations. The judge is dedicated to finding ways to improve her own performance as well as to improve the judicial system in general.

Experience & Education: Judge Baca has served as a Metropolitan Judge since November, 1988. She has served on the Advisory Committee on the Code of Judicial Conduct and is currently the presiding Criminal Judge of the Metropolitan Court and Drug Court. Judge Baca received the Outstanding Judge of the Year award from the Albuquerque Bar Association in 1990. She graduated from the University of New Mexico School of Law in 1980.