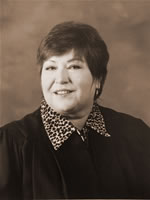 Evaluation: Judge Gomez' performance was rated favorably by those surveyed for this evaluation. Respondents indicate that she displays a basic sense of fairness, treats participants in her courtroom equally and courteously, and is knowledgeable of the rules of substantive law, procedure, and evidence. Judge Gomez received lower ratings for her punctuality in commencing proceedings. The judge acknowledges that this is an area of concern and has expressed a desire to improve in this regard. Judge Gomez' gambling problem has been made public, and she has indicated she is taking positive steps towards dealing with this problem. The decision not to make a recommendation on retention was based on what impact this problem may have on Judge Gomez' future judicial performance.