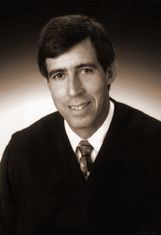 Evaluation: Judge Gentry's ratings have generally declined since his last evaluation. Judge Gentry received low ratings from the attorneys surveyed during this evaluation process. He received poor evaluations in areas related to fairness and treating participants equally. Some users of his court indicate that Judge Gentry prejudges the outcome of cases, that he is not sensitive to the impact of his demeanor, and that he behaves in an arrogant manner. Judge Gentry does not understand why he is perceived as prejudging cases. Judge Gentry also receives very low marks for being punctual in commencing proceedings not only among the attorneys, but also the court staff and resource staff (police officers, etc.). Judge Gentry received slightly higher ratings in the areas of courtroom control, attention to the proceedings, and timeliness of ruling on cases and motions.

Experience & Education: Judge Gentry was elected to the Metropolitan Court in 1986. Prior to this he worked as a defense lawyer in private practice and as an Assistant Bernalillo County District Attorney. He graduated from the University of New Mexico School of Law in 1979.