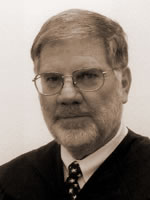 Evaluation: This evaluation indicates that Judge Forbes is an effective and competent judge. He received favorable ratings in nearly all areas, with respondents reporting that the judge handles his courtroom with efficiency and that he conducts himself in a courteous and dignified manner. No specific concerns were raised during this review process. Judge Forbes has improved his already high ratings in many areas since his last evaluation, particularly in the areas of courtroom control and interpersonal communication. He has expressed a determination to continue to improve his overall performance and will focus on communicating decisions to litigants with increased clarity.