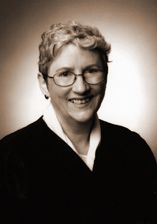 Evaluation: Judge Conway received positive ratings from all the groups surveyed by the Commission. Specific strengths include fairness, courtesy, knowledge of the law and rules of procedure, attentiveness, and maintaining proper control of the courtroom. No specific weaknesses were identified during this evaluation. However, Judge Conway has expressed a desire to improve in all areas, especially in the timely disposition of her written communications. Since her previous evaluation, the judge has demonstrated improvement in the areas of respect, fairness, and punctuality in commencing proceedings.

Experience & Education: Judge Conway was appointed to the District Court in May 1985 and was elected to the bench in November 1986. She served as a Family Court Judge from 1985 through 1988. From 1989 to present, she has served as a judge in the Civil Division of the court. Judge Conway has displayed a firm commitment to community involvement, serving on several councils and boards relating to children's and domestic violence issues. She received her undergraduate degree in English Literature, having attended Barnard College and Columbia University. Judge Conway graduated from Northeastern University's School of Law in 1973 and was admitted to practice law in New Mexico in 1974