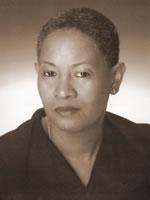 Evaluation: The commission is particularly concerned about Judge Keesha-Maria Ashanti's indifferent attitude toward self-improvement when issues related to her evaluations have been brought to her attention. Judge Ashanti's evaluations from one group of court participants were among the poorest reviewed by the commission. They indicate that she does not always display a basic sense of fairness or courtesy, that she prejudges cases and generally displays an unacceptable demeanor. While she has shown improvement in some areas since her last evaluation, a number of those surveyed rated her overall judicial performance as either 'poor' or 'very poor'.

Experience & Education: Judge Ashanti has served as a Metropolitan Court judge since 1986. Before coming to the bench she worked in private practice. The judge received her law degree from Southwest University School of Law in Los Angeles in 1978.