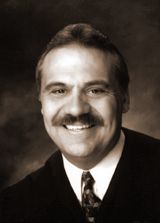 Evaluation: Judge Candelaria received some of the highest ratings in his judicial district. Survey results indicate that he conducts himself in a manner free from impropriety, is consistently respectful and courteous to all, is knowledgeable of the law, and is efficient in the management and administration of his court. The survey of individuals involved in his court identified no specific weaknesses. However, the judge is dedicated to continued improvement in the areas of fairness, punctuality, and promptness in scheduling hearings.

Experience & Education: Judge Candelaria was admitted to the State Bar of New Mexico in 1986 and was licensed before the US District Court of New Mexico in 1988. He serves as District Judge in the Second Judicial District. Previous experience includes serving as a Bernalillo County Metropolitan Court Judge for over four years and as Deputy District Attorney in the Second Judicial District for eight years, during which time he served as the Supervisor of the Narcotics Trafficking and Violent Crimes Divisions. Judge Candelaria received his Bachelor of Science degree in Criminology from the University of Albuquerque and his law degree from the University of New Mexico.