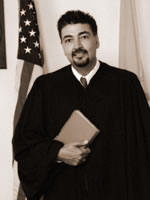 Experience & Education: Judge Sanchez was elected District Judge in November 1992. Prior to his election, he served as Assistant District Attorney, from October 1980 to November 1983, and was in private practice from November 1983 to December 1992. He presides over a diversified docket and hears civil, criminal, children's court and domestic relations cases. He received both his undergraduate and law degrees from the University of New Mexico.