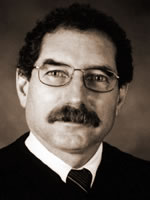 Evaluation: Judge Pfeffer received overall positive ratings from all of the populations surveyed. For example, attorneys rated him highly for being courteous to all participants, being attentive to proceedings, and for discharging responsibilities diligently. Court staff rated him highly for maintaining appropriate hours given the workload and for conducting himself in a manner free from impropriety. The resource staff (e.g. law enforcement officers, CASA volunteers, etc.) rated Judge Pfeffer well for being courteous to all participants, displaying familiarity with court cases through prior preparation, and for maintaining proper control over the proceedings. Although still reasonably positive, Judge Pfeffer received a slightly lower score from attorneys in the area of punctuality in commencing proceedings. Judge Pfeffer acknowledges this concern and has ideas for ways of improvement in that area.

Experience & Education: Judge Pfeffer was appointed to the district judgeship in 1996 and elected in 1998. He is now serving as Chief Judge for the First Judicial District. He was Assistant City Attorney in Pueblo, Colorado from 1973-1976 and in private practice in New Mexico from 1977-1997. He received his BA and law degree from the University of Denver. At the request of the Supreme Court and the Judicial Standards Commission, Judge Pfeffer has been a mentor for other judges. In 2004, he received the Common Good Annual Gatekeeper Award.