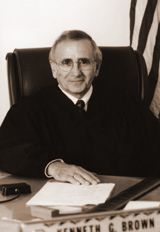 Evaluation: Judge Brown received positive ratings during this evaluation. The judge brings to his position extensive experience on the bench and valuable knowledge in dealing with juvenile matters. The evaluation results reveal his specific strengths to include his proper control over the courtroom, his courtesy and fairness to those he encounters. The judge is dedicated to improving his performance; for example, he has demonstrated a commitment to improve his oral communication skills and his preparation of cases before trial. The judge has maintained or improved upon the above-average ratings given in his prior evaluation and has consistently expressed willingness and interest in ongoing self-improvement.

Experience & Education: Judge Brown has been a District Court Judge since January 1, 1985. In addition to his experience on the bench, the judge has also shown strong commitment to his community by his involvement in various legal and civic activities. For example, the judge is a member of the Rotary Club, American Bar Association, National Council of Juvenile and Family Law, New Mexico Judges' Association, and the National Conference of State Trial Judges. Judge Brown received both his undergraduate and his law degrees from the University of New Mexico.