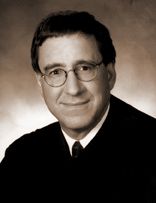 Evaluation: Judge Hall received a very positive evaluation on his judicial performance from both attorneys and non-attorneys. For example, attorneys rated him very highly for treating self-represented litigants fairly, for displaying familiarity with cases through prior preparation, being attentive to proceedings, and for having a dignified demeanor. Court staff rated Judge Hall very highly for conducting himself in a manner free from impropriety, respecting all court employees, and for maintaining appropriate hours given his workload. In addition, the resource staff (e.g. law enforcement officers, CASA volunteers, etc.) rated the judge highly for maintaining proper control over the proceedings, discharging responsibilities diligently, and for displaying a sense of fairness, impartiality and justice.

Experience & Education: Judge Hall was appointed District Court Judge in 1995 and elected in 1996. He presides over civil cases. Prior to being appointed, he worked in private practice and served in the First Judicial District Attorney's Office, as well as in the New Mexico Attorney General's Office. He also served as Chief Judge of the First Judicial District from 2001 to April of 2008. Judge Hall received his undergraduate degree from DePauw University and his law degree from the University of Michigan.