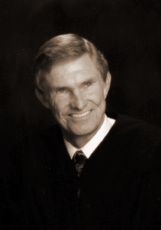 Evaluation: Judge Bridgforth received positive ratings from both attorneys and non-attorneys. Among the attorneys, he was given favorable ratings for his overall demeanor, attentiveness to the proceedings, maintaining proper control over the courtroom, and ruling on motions and cases in a timely manner. He received positive scores among non-attorneys on all attributes, particularly for conducting himself in a proper manner free from impropriety or the appearance of impropriety, attentiveness to the proceedings, and displaying a sense of fairness, impartiality and justice. Lawyers appearing before Judge Bridgforth rated him slightly lower (compared to his other scores) for displaying a sense of fairness and avoiding prejudging the outcome of cases. However, Judge Bridgforth's scores in these areas have improved somewhat since his last evaluation in 2005.