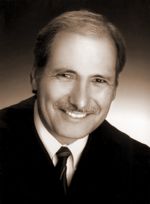 Evaluation: Judge Baca received positive ratings from all of the groups surveyed. Attorneys rated him highly for being courteous to all participants, being punctual in commencing proceedings, and for maintaining proper control over the proceedings. The court staff rated Judge Baca highly for being prompt in scheduling hearings and trials, for being punctual in commencing proceedings, and for having a dignified demeanor. Even with these positive scores, the Judge indicated there are areas where he is striving to improve.

Experience & Education: Judge Baca has served as District Court Judge since 1998. He serves as the presiding Judge of the Civil Division. Prior to becoming a District Court Judge, he was in private practice for approximately 22 years. He is a member of the Knights of Columbus, Albuquerque Bar Association, and the Hispanic Bar Association. Judge Baca received his undergraduate degree and law degree from the University of New Mexico.