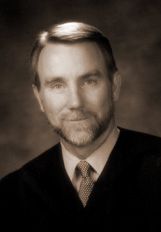 Evaluation: Judge Brack received positive ratings as part of this evaluation. Respondents indicate that the judge is attentive to the proceedings, maintains proper control over courtroom, provides clear communications, treats those that appear before him with respect, and runs his courtroom efficiently. No specific weaknesses were identified during this evaluation. Judge Brack has shown improvement in almost every aspect of his performance since his previous evaluation.

Experience & Education: Judge Brack has served as District Court judge since his appointment in 1996; he was elected to that same position in 1998. Prior to this he worked as a private attorney in general civil practice in Clovis, New Mexico. The judge's community involvement includes participation in youth and church activities. He received his undergraduate degree from Eastern New Mexico University and studied law at Tulane University and University of New Mexico, receiving his law degree from the latter institution in 1978.