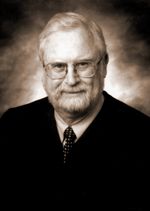 Evaluation: Judge Allen received very high ratings as part of this evaluation, particularly from lawyers and court staff. These groups' ratings exceeded the judge's self evaluation scores in nearly every category. The survey results indicate Judge Allen's strengths include maintaining positive working relationships, displaying dedication to his job, overseeing a highly efficient courtroom, and mentoring fellow judges. While there is no formal mentoring program, Judge Allen is always available and willing to serve in this capacity. Evaluation results indicate he is knowledgeable of the law and well-versed in trial and court procedure.

Experience & Education: Judge Allen is well respected by the bench and bar alike, and has practiced law for 25 years and has served as a judge for 15 years. He also expresses a positive attitude toward self-improvement. Judge Allen has served as a judge at the Second Judicial District since April of 1989, and served on the same court from January 1981 to September 1985. He has been the presiding judge for the Criminal Division since 1989. He was also a First Lieutenant in the US Army Corps of Engineers. The judge obtained his undergraduate degree from West Virginia University and his law degree from the University of Illinois.