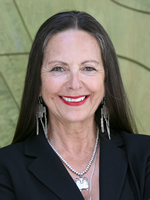 ALBUQUERQUE — The New Mexico Judicial Performance Evaluation Commission (JPEC) has announced the appointment of Patricia L. Quintana of Taos as a member.

JPEC was established by the Supreme Court of New Mexico in 1997 as a volunteer nonpartisan commission to improve the performance of New Mexico’s judges and provide useful, credible information to voters on judges standing for retention in elections.

Quintana is the owner/operator of Rancho La Fina Lamb and Wool and De La Tierra Consulting. She holds a master’s degree in Agriculture from New Mexico State University (NMSU); a bachelor’s degree in Animal Science from NMSU; and was an Executive Fellow of the John F. Kennedy School of Government, Harvard University, in 2005.
Quintana’s career has focused on advocacy for the conservation of agricultural communities throughout the world as well as linking agriculture to economic development and making wise land use decisions.
She has served as a consultant to the New Mexico Legislature and the Navajo Nation. Under the auspices of the United States Agency for International Development (USAID) and Winrock International, she has provided agricultural consulting in varied locales around the globe, including the Republic of Mali in West Africa, the Republics of Uzbekistan, Kazakhstan, and Krygyzstan, Mexico, Ecuador, and many others.

Her previous experience includes positions as Executive Director of the Taos Land Trust, Director of Government Relations for NMSU and Special Assistant to the New Mexico Department of Agriculture. She has also shared her knowledge and experience as a founder, board member or commissioner for countless organizations. She was honored as one of the Remarkable Women of Taos in addition to receiving recognition from the New Mexico Commission on the Status of Women and being named New Mexico State Employee of the Year by the Coalition of New Mexico and Arizona Counties.
The New Mexico Judicial Performance Evaluation Commission is comprised of 15 individuals — seven lawyers and eight non-lawyers — who are appointed by the Supreme Court to staggered terms. Members are selected from nominations made by the Governor, Chief Justice of the Supreme Court, Speaker of the House, Senate President Pro Tempore, House Minority Leader, Senate Minority Leader and President of the State Bar.